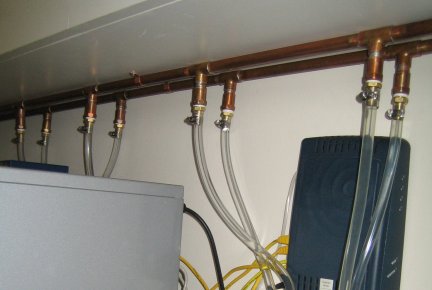 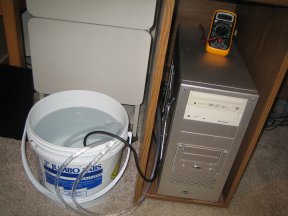 This is a very simple test with a bucket of water and a single water block. The water in the bucket reaches equilibrium at about 96 F and thus evaporates quite quickly. 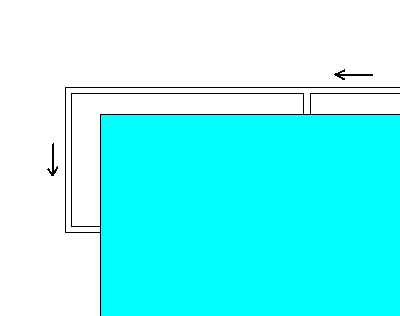 This is the plumbing around the pool without modification. We can see where there are two returns on this corner from the filter pump. 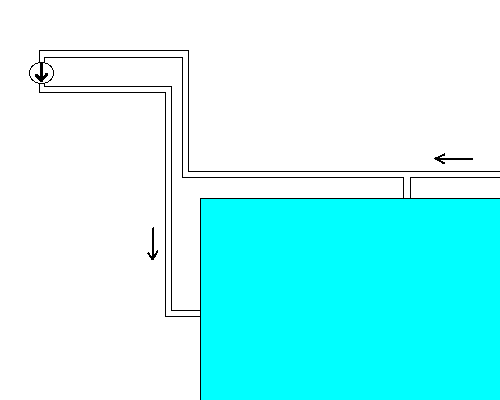 Next, we insert a check valve into the system. This has no affect on the operation of the filter pump but it will come in handy later. 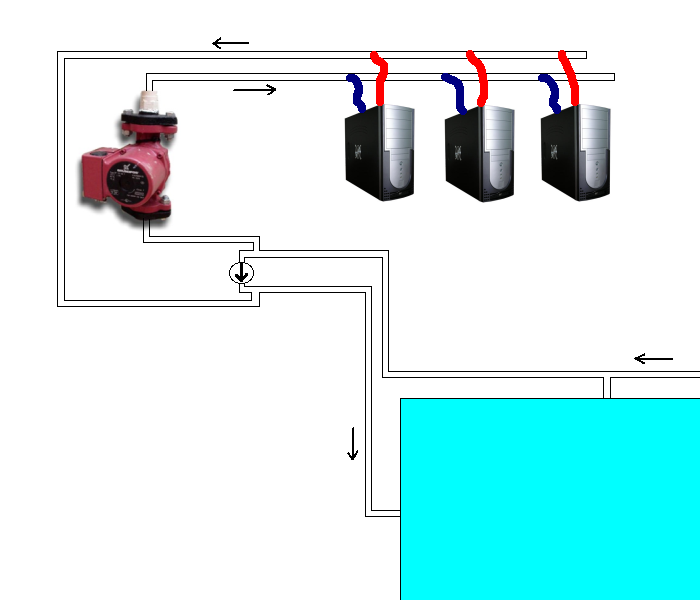 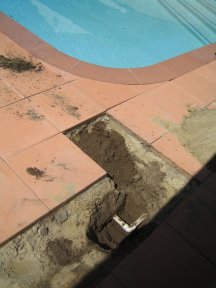 First step: breaking into existing pool plumbing. This required some special plugging of the returns so as not to empty the first 8 inches of water. 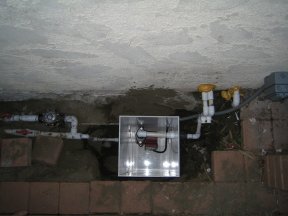 The pump is a Grundfos hot water recirculating pump. This type of pump is ideal because it is designed for continuous operation and has very small power requirements (~85 watts). This pump is not approved for outdoor use, so a waterproof box had to be constructed from sheet ABS plastic. Special care was taken to ensure the pump was located below water level. This will gurantee the pump can never run dry. 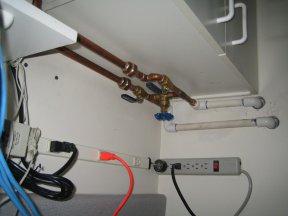 Two ball valves were installed to allow easy shutoff close to the computers as well as a gate valve which allows precise bypass control. This way, computer connections can be exchanged without the need to shut off the cooling pump. 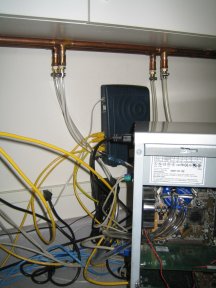 Lines run through the attic and are made of 1/2" PVC. The exposed manifold is made of 1/2" copper with six sets of 3/8" hose barbs. Currently there are four machines connected using Zalman waterblocks. 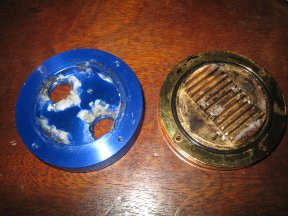 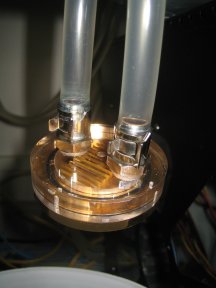 After only a few weeks of operation, it became apparent that the aluminum and gold sandwich of the waterblock were not playing nicely together. To fix this, the aluminum tops of each waterblock were replaced with clear acrylic plastic. These not only fixed the corrosion problem, but added a new level of aesthetics to the project :)

This rig has been running successfully since 8/06 (knock knock). Computers have been easily swapped out without the need to shut down the pump or any other computers on the line. There is no perceptible temperature difference in the water returned to the pool. However, every machine on the line happily operates somewhere between 30 - 40 C depending on the water temperature. Most of the fans in each machine have either been removed or disconnected making it much quieter. Additionally, the entire room is cooler without the need for air conditioning. Success!

In the future, I'd like to investigate the possibility of using pool water to improve the efficiency of the air conditioner by removing the fan and submerging the heat exchanger. Quieter, cooler, more energy efficient air during the summer as well as warmer water!

All of the materials; PVC, ABS, other hard plastics, stainless steel on the pump housing, copper on the manifold and waterblocks, and gold plating on the waterblocks will all likely react with the chlorine to some extent - but not to any degree that will cause problems in the near future. These materials are all prevalent in swimming pool equipment already.

While it would be nice to eventually have some flow sensors to detect leaks and pump malfunctions, a software solution has been put in place for the time being. For whatever reason, if the temperature of the CPU exceeds a predetermined threshold, computers will shut themselves off.

This is probably not up to code. However, the pool is properly grounded and all computers are likewise grounded. A GFI on this circuit might not be a bad idea though.

The point of this experiment was to decrease the dependence on air conditioning while minimizing costs. This entire project cost no more than $400. While corrosion and leaks are a chief concern, the addition of a separate freshwater loop and a heat exchanger would significantly increase costs and complexity and there would still be the same issues of eventual corrosion.